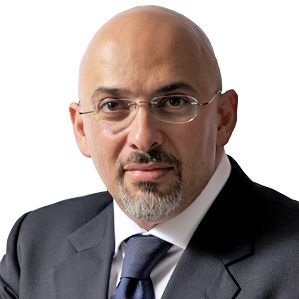 Nadhim was born in Baghdad to Kurdish parents in 1967. Under threat of persecution from Saddam Hussein’s regime, his family immigrated to the UK when he was 9. He grew up in Sussex and was educated at King’s College School in West London and University College London where he studied Chemical Engineering.

In 2000 he founded YouGov, a leading market research company which has since become famous for the accuracy of its political polling. Having started life in an office in Nadhim’s garden shed, YouGov now employs over 400 people on three continents. He floated the company on the London Stock Exchange in 2005 and was named Entrepreneur of the year by Ernst & Young in 2008.

In January 2010 he stood down from YouGov to run for election as Member of Parliament for Stratford-on-Avon. Upon winning the seat, Nadhim was elected to the Business, Innovation and Skills Select Committee, which scrutinises the impact of government policy on business.

In 2011 he co-authored Masters of Nothing with fellow MP Matt Hancock. The book is an account of the human behaviour behind the banking crash and ends with policy recommendations designed to prevent a future crisis. Several of these recommendations were adopted by the Coalition Government.

In 2013 he was appointed to the Prime Minister’s Policy Board with special responsibility for business and the economy. In June 2014 he was elected to the Foreign Affairs Select Committee, which examines the Government's foreign policy. Nadhim was re-elected to this select committee in 2015. In November of 2015 Nadhim was appointed by David Cameron as the Prime Minister’s Apprenticeship Adviser.

In September 2021 Nadhim was appointed Secretary of State for Education and in July 2022 the Prime Minister appointed Nadhim as Chancellor of the Exchequer.

Since being elected Nadhim has campaigned hard on a range of issues: from fighting inappropriate development in the constituency, to reforming welfare, developing better traffic management in Stratford, improving the quality and availability of non-university higher education, and most recently opposing changes to services at the Horton General Hospital in Banbury used by many constituents.

Nadhim is married to Lana and has three children.